In 1977, after the break up of The Naturals, I was the co-founder of Bits & Pieces a self-contained quartet of versatile musicians and singers. We traveled the U.S. on the hotel lounge and private club circuit as a backup band for several lounge entertainers. I sang and played the bass guitar.

In 1979 I left Bits & Pieces for Los Angles and began my career on the West Coast, a long time dream. In a matter weeks I auditioned and got a gig with Cornell Gunther & The Coasters  and a couple weeks later we opened  in Las Vegas. 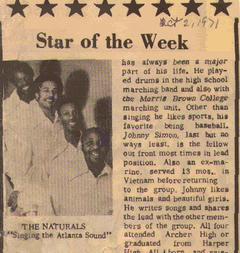 My professional singing career began in 1970 as the bass singer of a popular Atlanta, GA group, "THE NATURALS". Pictured 2nd from the bottom Robert Fitzpatrick was a young 22 years old. The Naturals first record, entitled "I Can't Share You", was an instant hit in New York City in 1971. The group performed at the world famous Apollo Theater for a week in March '71. In 1975 the group recorded a popular 60's tune, Crystal Blue Persuasion, which received great reviews on American Bandstand.

1980 landed me in Northern California, and the music of choice became roots rock Reggae. In the late 80's I co-founded UPRISING in San Jose, CA with bay area reggae singer Keith Hames,. The group quickly became one of the area's strongest vocal and reggae rhythm bands.

Uprising was forced to change it's name in 1994 to avoid legal actions from a reggae band from Maryland who owned the rights to that name. RASTAFIRE was born in May 1994 as a result.  Since 1988 Rastafire has played throughout Northern California, Nevada and Arizona. We are a very entertaining, well dressed, colorful, reggae dance band, with great vocals and driving riddims.

Rastafire has performed with many of Reggae's Top Stars including Joe Higgs, Eek-a-mouse, Black Uhuru, Pato Baton, The Itals and many more in the concert and festival venues.
In 2001 I relocated to Northwest Arizona where "Rastafire" has performed around the area with various configurations and  is currently a power trio featuring Leonard Interior lead/background vocals and great guitar work, 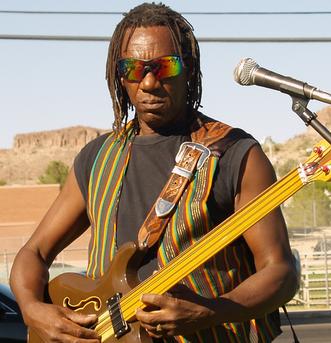